I was the plots nearly all day today. First thing this morning I went over to uncover the eggplant and peppers. They were all fine and happy. Then I went home for a bit and went back to do some much needed weeding and tidying up.

The first bed that I worked on was Bed #2. This bed has potatoes at the one end and some snow peas on the side. 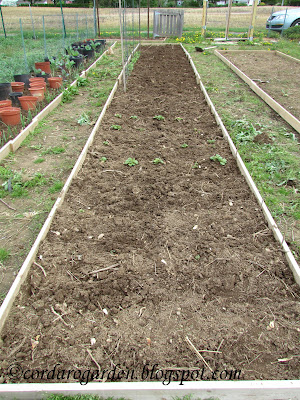 I dug out some small thistles, loosen the soil in the entire bed and pulled the big weeds in the paths. Since everyone at the plots complains about potato beetles, I decided to throw some pieces of dried up garlic around the potatoes. It may help and it may not, but it certainly won't hurt. I have only seen a couple which were killed immediately....squish. As you can see the Kennebecs are coming up much quicker and are much bigger then the Sagres.
Then I started on Bed #1 a/k/a The Weedy Pot Bed. I removed each and every pot weeded, loosen the soil and also put a piece of garlic near each plant. 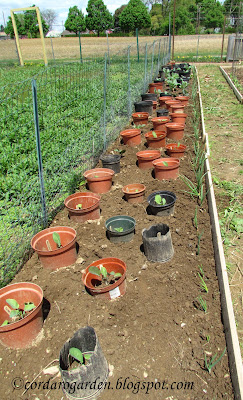 This bed took a bit of time since it is the weedy garden. 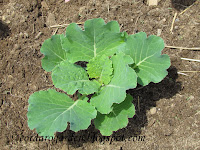 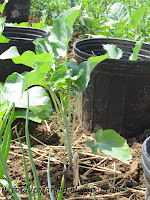 All of the cauliflower that were planted are doing well. The cabbage, brussels sprouts and broccoli are really growing nicely. I also put pieces of garlic in this bed to deter insects.
Next I worked on the Purple Passion asparagus bed. 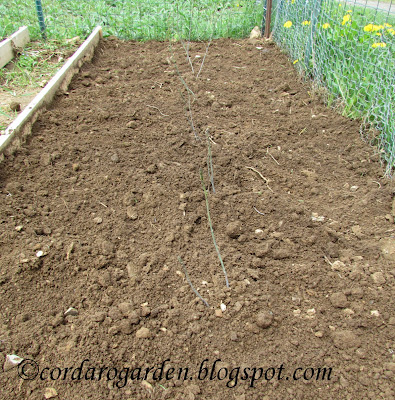 I removed a few weeds and leveled out the bed. Later I planted some parsley in the front of this bed. Parsley is supposed to be a great companion plant for asparagus. No pics though...I'll tell you why later.
The next area to be tackled was Berry Alley. You would not believe all the runners from the blackberry & raspberries bushes. There was also a lot of thistle to be removed back there. 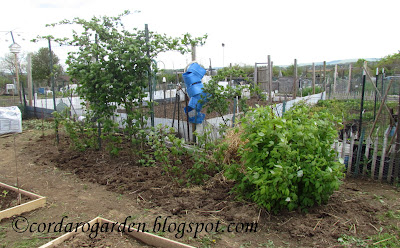 The berries are definitely filling out. 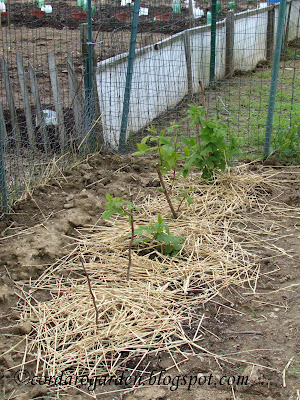 The new Heritage Raspberries that I planted are also doing well.
When I was working behind the blackberries I found this growing up between the posts and stakes I have back there. 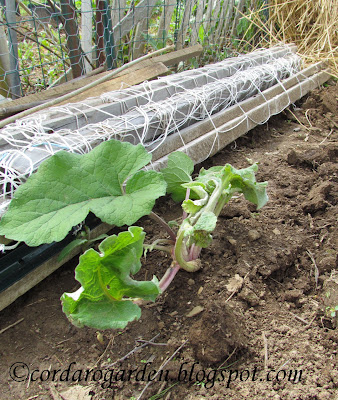 Is this just a nasty weed or could it be a variety of rhubarb? The stalks that are white were under the posts. It's not like I've never nursed along a weed before or pulled a perfectly good plant.
Next I loosened up the soil at the end of the strawberry bed where the Fava Beans were planted. 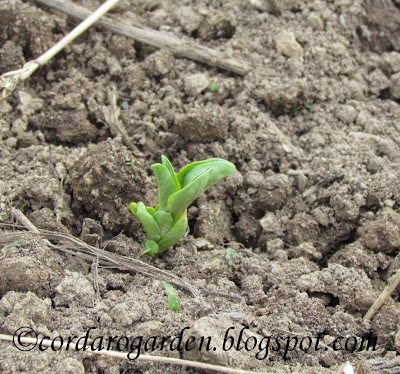 The beans are all popping up!
Then I started on the strawberry bed. By this time I was getting a bit tired. 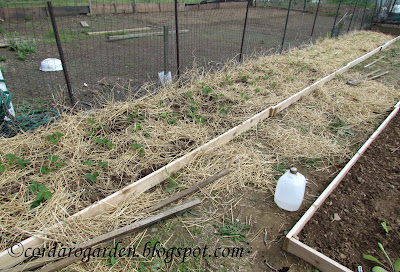 There are some areas in the strawberry bed that have weeds under the straw and some don't. This bed is along the side as is the Pot Garden. The weeds in both the beds are due to the neighboring plots. I decided to stop working on the bed since there were a couple of other things that I really needed to get to before I left to go home. 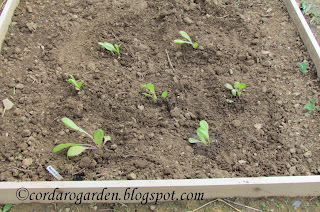 A few small radicchio plants had to go in.
Then I really needed to get to the other asparagus bed. 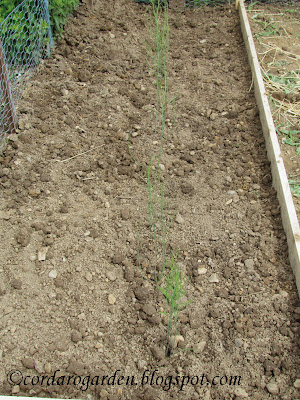 While I was working on the Jersey Supreme Asparagus bed. I undercovered ants!! They were bitting me and I really had to potty!!! So I packed it up and headed out. I really had intended to take some pictures of the eggplants, peppers and parsley....but there was no way!!
Posted by Robin at 7:23 PM