There's some Growing on in the Basement!

It looks like the germinating season is moving along! Right now I have many seedlings at various stages growing in the basement. This is just the beginning and the shuffling has already begun! I have not had too many problems so far. The leeks and celery seem to be taking for ever, but that is normal. I had originally sown both with some older seed in hopes that the seed would still be good. Well, I re-seeded both with some new seed and threw out the old.

This is the first time that I have started some spinach inside and the results have been so so. A few of the early tomatoes have formed their true leaves and my "Little Garden Helper's sunflowers are already out of control! All of the herbs including the Rosemary are doing very well. 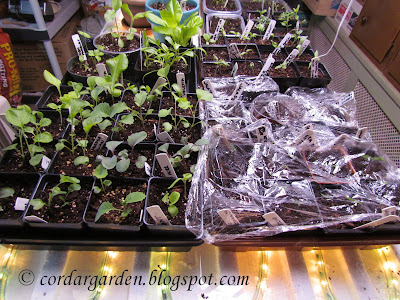