First, I have to apologize for not answering any questions from last week's Harvest Monday. I was not available most of the week. I know that a lot of you were very curious about the Winter Storage Tomatoes. I will definitely write an update on them soon.

The purple pole beans are finally coming in at a normal pace. Since I was not here much last week, I only harvested a little over 2.25 pounds. I had to throw out about 5 pounds that got too big. The tomatoes are really slowing down with almost 13.5 pounds harvested. It looks like we will be having a lot of  "Matt's Wild Cherry" tomatoes for some time though. That plant puts out about 100 fruits every other day. There is also a volunteer of the same variety growing by the compost bin. That will keep "The Italian" happy, since he has a bowl every morning with his breakfast. They are definitely the sweetest cherry tomato I have ever tasted.

All of the eggplant are doing really well. I harvested 6 this week and there are many more on the plants. The cantaloupe and muskmelons have been picked. We were pleased with the flavor of the cantaloupe this year. They were all nice & juicy. The first one was not as sweet as the others. All and all they were quite good. We have yet to taste the muskmelons. I will let everyone know how they tasted a little later in the week.

There were a few bell peppers picked and frozen this week. They are really taking their good old time this year. The hot peppers are a different story though. They are coming in like crazy. I think that we will be in good shape with them for the winter. 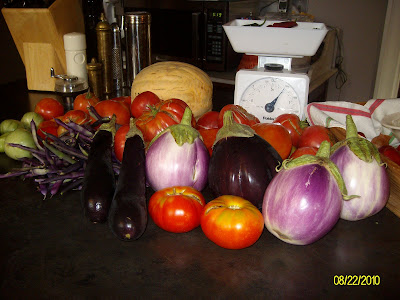