Well, this weeks harvest had a very nice first. I harvested the first leeks from the Spring planting. Although the picture doesn't show how big they are. They are the biggest I have ever grown! I did trim them a little more once I brought them in...as per "The Italian's" request. They weighed in after trimming at 1 lb. 12 oz. ﻿There are still at least 10 more smaller leeks in the garden that we will enjoy them during the winter. 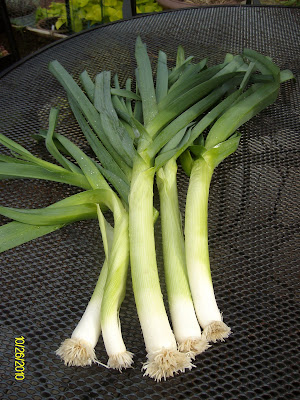 Look at those Leeks!
They will be made into potato and leek soup. 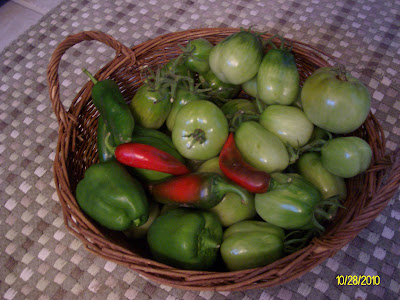 This is the last of the tomatoes and some peppers.
The last tomato harvest weighed in at 3 1/2 lbs.
The "Matt's Wild Cherry" and "Amish Paste" plants had to be pulled earlier in the week due to a massive aphid infestation. Although I wanted to bring in a couple hundred more of the sweet cherries to enjoy, I couldn't risk it and threw them in the trash :( We are going to miss our fresh red tomatoes. 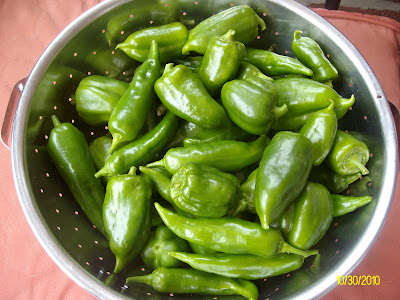 Here's the last of the bell peppers.
Last of the Bells 4 lbs. 2 oz.
They were predicting two nights of frost in a row. So, I decided to pull the plants and bring the remaining peppers in. They are quite small and did not get to turn their designated colors. I froze some of them and gave the rest to my sister in-law for her to freeze.
The last of the hot peppers were also harvested weighing in at 1 lb 10 oz.
Harvest Total - 11 lbs
Leeks - 1 lb. 12 oz.
Peppers:
Bell - 4 lbs. 2 oz.
Hot - 1 lb. 10 oz.
Tomatoes - 3 lbs. 8 oz.
Stop by Daphne's Dandelions the host of "Harvest Monday" to see more Fall Harvests!﻿
Posted by Robin at 7:13 PM 17 comments:

Well, I finally got the garlic planted this morning! It rained all day yesterday.....so, I did some canning and cleaning. I usually plant my garlic in September or earlier in October. But, it's planted now and mulched with straw for the winter. 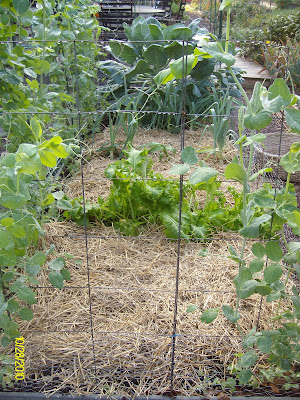 Here's the garlic planted and mulched between the remaining leeks, mustard greens, peas and brussel sprouts.﻿ I planted about 65 cloves this year. 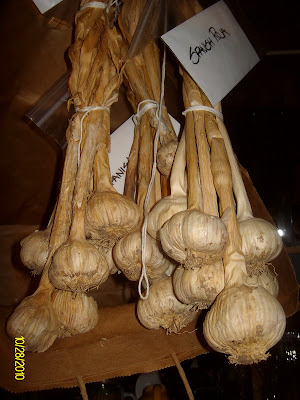 When I went down in to the basement to get garlic to plant, I found that the Spanish Roja garlic is not storing very well. Quite a few of the heads are drying up. Last year was the first year I planted this variety. It produced nice big heads and has a flavor that we like. However, since it is not storing well. I did not plant it again. 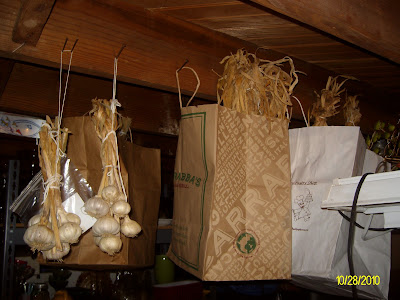 As you can see, the other garlic is storing quite well.
This is how I store my garlic for the year. I hang it from the rafters in the basement and cover it with brown paper bags. This method of storage has been working very well for me. In the past we always have enough garlic to last us throughout the year.
Posted by Robin at 7:27 PM 4 comments:

has finally started! I spent a day and a half doing some fall garden clean up. I think that I have about 3 more full days of work to do out there.  I spent at least 4 hours cleaning up behind the shed and messing around with the compost bins. There was a huge volunteer cherry tomato plant by the bins, some left over manure compost (a truck load was given to me in the early spring by an old freind who has a horse farm) behind the shed on the concrete and a lot of trimmings from the bushes next door that had to be bagged. I don't put the trimmings from the bushes in the compost bins. They would take too long to break down. The city picks up the yard waste and makes compost and mulch with it. Residents of the city can go to the yard waste site and pick up mulch and compost for free. 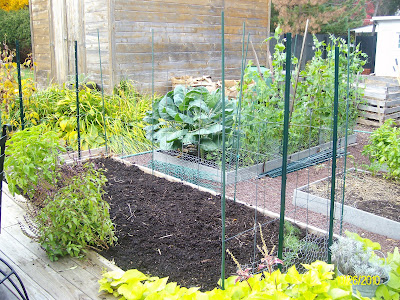 The front bed in the back has only two basil plants, one lone carrot and a couple of dill plants left in it. I added some compost on Monday and it is ready for some veggies to overwinter. Hopefully, we can make some kind of cold frame this weekend to put over part of that bed.
The large bed behind the front bed to the left has two brussel sprout plants, some leeks, mustard greens and peas left in it. I harvested some of the leeks on Tuesday. They were nice and big! I left about ten smaller leeks in the garden for the winter. I also pulled the remaining dry bean plants out of that bed and hung them to finish drying. I really need the room to plant the garlic. I usually plant it in September or early October. The snow peas in that bed are about five feet tall. They have blooms on the vines...but, no pods. If I don't get any pods at least some much needed nitrogen will be added to the soil. 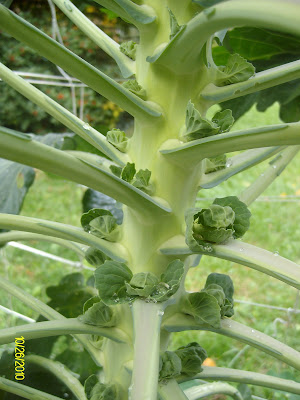 The Brussel Sprouts are finally starting to form little heads. I think that they are a magnificent looking plant. I have two in the back garden and one in the side garden. The plant in the side garden is over 4 feet tall. Hopefully the plants will form some nice little heads for eating. They were put into the garden in the early spring and still are not big enough to eat. 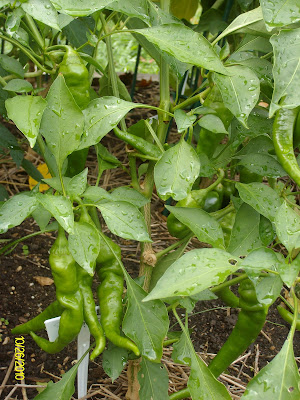 There are about a dozen and a half cayennes on this plant. There are also a lot of serrano, hot cherry, jalapenos and bells out there. I pickled some on Tuesday and will be pickling more soon. 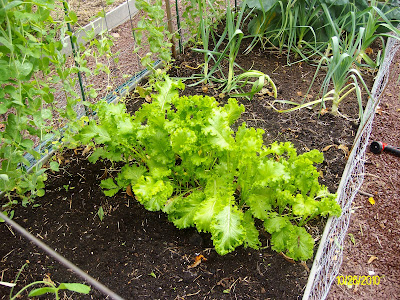 The mustard greens are looking good. I guess "The Italian" better get cooking!!
﻿
Posted by Robin at 7:28 AM 8 comments:

Although I did not have enough cabbage in the garden to make sauerkraut from this year, this German did manage to make it anyway! On Sunday, I found some HUGE local grown cabbage heads for $2. each at the flea market! I bought three and did a lot of chopping.....TaDa....sauerkraut in the making! 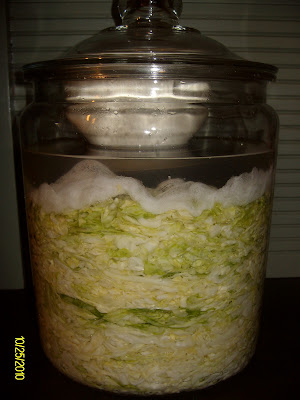 The cabbage is sliced, salted, covered with cheese cloth and weighted down with plate and a bowl. It will now spend several weeks in the basement fermenting until it is ready to be canned. It's really kind of gross when it is fermenting...but, worth it in the end!
﻿
Posted by Robin at 8:12 AM 11 comments:

Surprisingly we haven't had a frost and the garden is still producing tomatoes and a lot of hot peppers. Saturday I harvested 12 oz of Serrano peppers and 6 oz of Jalapeno peppers. There are quite a few bell, paprika, cayenne, more serrano and hot cherry peppers on the plants. We are supposed to have a very warm week. I am going to leave them on the plants in hope of them turning red, yellow or orange.

Over the past 3 weeks more then 10 lbs of usable tomatoes have been harvested and 11 oz. of eggplant. Yesterday I pulled out 5 more tomato plants, leaving only 2 viable plants in the garden. The "Matt's Wild Cherry" and an "Amish Paste" are the only tomato plants remaining. I had left 2 eggplants in the ground hoping that the small fruit would grow a bit. However, they did not get enough sunlight and warmth to grow so I decided to pull the plants yesterday as well. 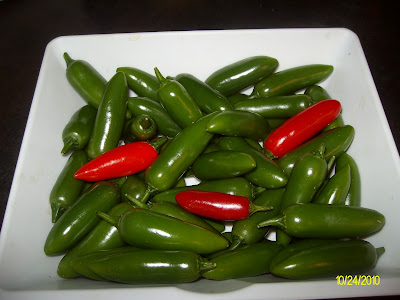 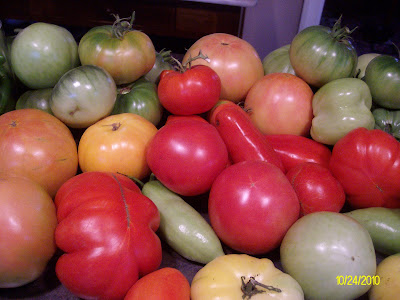 A nice variety of tomatoes

I did it! I managed to get the Green Tomato Jam made before we left. The Red Tomato Jam will have to wait until we get home. "The Italian" has been very happy eating tomato sandwiches this week for lunch. So, there weren't enough to make a batch. Hopefully, the green tomatoes will ripen inside while we are away and the House Sitter won't eat all of them. 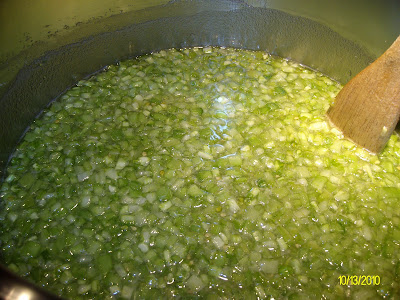 The jam is such a pretty green when it first starts to cook. 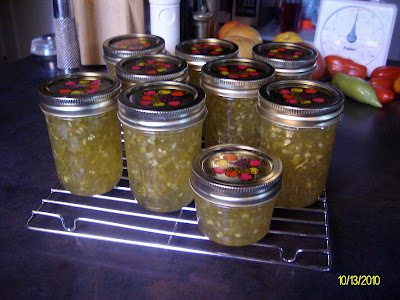 The finished product cooling.
I wish that the jam would stay bright green.
This recipe can be found at
﻿http://www.kraftrecipes.com/recipes/certo-green-tomato-jam-51875.aspx
Posted by Robin at 5:16 AM 7 comments:

A Little bit of Canning and...

cooking going on around here. I spent the weekend doing a lot of cooking and canning. I made a batch of Roasted Red Pepper Spread. It was a lot of work and tastes good. However, I think that we will mix it with cream cheese when we use it. I also made a batch of Eggplant Caponata. It's absolutely wonderful!! I even got an "A OK" approval from "The Italian" and his family. The recipe (minus the pine nuts) is from the cookbook "The Silver Spoon". This is "The Italian Cooking Bible" which is now available in English. An additional batch of Hot Pepper Jelly was also made in between some baking (for my sister-in-law's BD) and making a big pot of homemade chicken noodle soup.

I forgot to take pictures of the Black Forest Cherry Cake and Lemon Squares that I made. The cake is a traditional German cake. I make a three layer dark chocolate cake and marinate cherry filling in Cognac for a couple of days. Then spread the marinated cherry filling between the layers, make whipped cream for frosting and grate some dark chocolate on top. It's absolutely wonderful! The Lemon Square are a great and easy recipe from the old "Betty Crocker Cookbook". 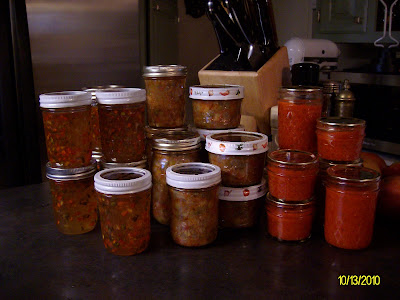 Hot Pepper Jelly, Eggplant Caponata & Roasted Red Pepper Spread
I am planning to make a batch of Red Tomato Jelly & Green Tomato Jelly before we leave for "The Big Easy". We will see!!
﻿
Posted by Robin at 7:43 AM 6 comments:

I finally got around to making one batch of  Hot Pepper Jelly. This is a favorite amongst many of our friends and family. So, I will have to make a least one more batch to get us through the year. 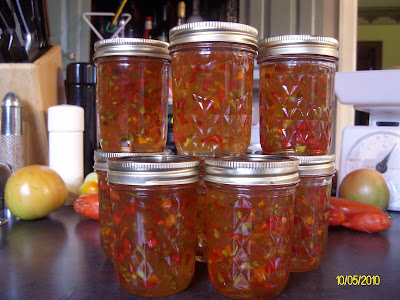 The batch yielded eight 1/2 pint jars.
In order to keep the pepper pieces from floating to the top, I keep turning and shaking the jars until the jelly is cooled. It usually takes about two hours to cool down enough to keep the pieces suspended throughout the jelly.
Posted by Robin at 3:49 PM 12 comments:

1st Fall Harvest Monday for ME!

I know it's been a month since I have posted anything. We have been going through some things here at home which I will share at a later date.

The garden is producing amazingly well for this time of year. The tomato plants look very healthy and have a lot of green fruit on them. I have harvested a little over 30 lbs over the past four weeks. It seems that the bugs are eating more then their fair share of tomatoes though. I really can't complain. Last year we had the blight and tomato season ended very early. I have been drying the "Matt's Wild Cherry" tomatoes on a regular basis and drying a lot of herbs as well. The days are getting shorter. So, who knows how much of the fruit will ripen before first frost. I guess that I need to make a least one batch of green tomato and red tomato jelly this week.

I have been harvesting eggplant on a regular basis as well. The total of the eggplant for the past four weeks is 3 lbs 5 1/2 oz. I made a very nice German/Italian (that's an Italian dish made by a German) Eggplant Parmesan this past week. "The Italian" really enjoyed it and said it was delicious!! 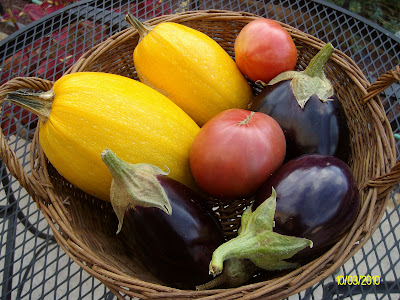 Here's a sampling of what I have been harvesting.
I decided to finally add the only squash that I harvested this year due to the SVB invasion. I wasn't sure if these two Spaghetti squash were going to ripen and be usable. 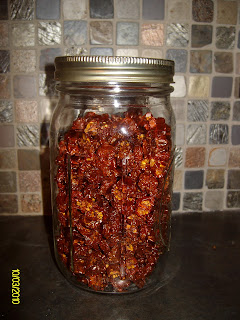