Today I finally got some of my early crops started! I was planning on starting some crops last weekend. However, cleaning up the basement and fixing my one germinating table took more time than I expected.

Since last year was my first time trying to use soil blocks......and I didn't do all that well with them. I decided to start my first plantings in containers. I am however planning to start my Broccoli, Cabbage & Cauliflower in soil blocks. 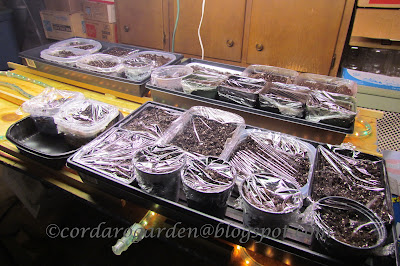 I started Collards, Arugula, Tatsoi, Pak Choi, Baby Choi, 4 varieties of Kale and 6 varieties of Lettuce. All of these will be planted out in the empty cold frames very early. 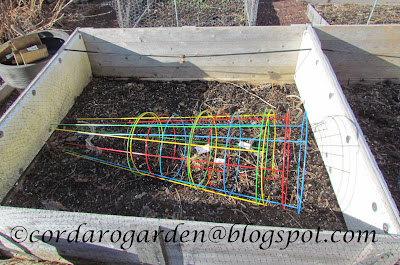 These pretty and colorful tomato cages are the only thing in the cold frames right now. "The Italian" got them for me for my Birthday in December. I think they are really cool! He had them all lined up in a path from where I park my car to the back door and then a special present in the last one! 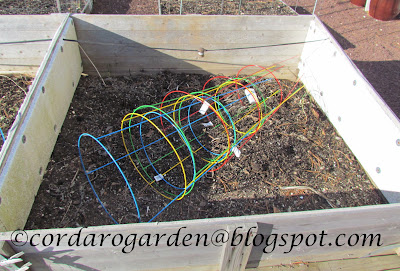 I didn't get around to planting the cold frames this past fall. Life got hectic and truthfully I think it was best for the soil. Last year I had slugs all winter and lots of bugs all season due to the mild winter we had. Maybe a good freeze will help things out a bit. That's my excuse reason and I'm sticking to it! 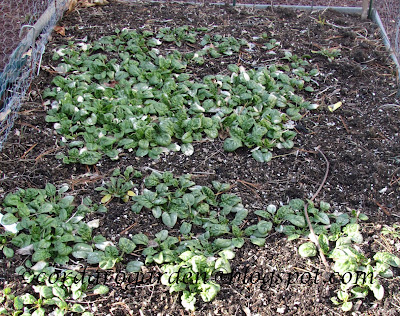 The overwintered spinach (the only way I can grow it) is doing well. The plants are very close right now. I will space them out once the weather permits. 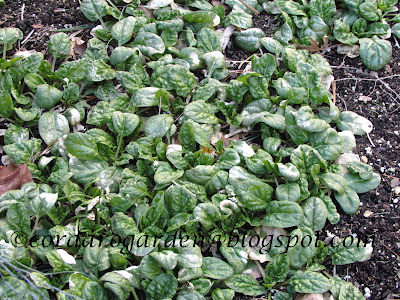 There are some burned leaves. But, we will have happy Spinach this Spring!
I also started two varieties of Leeks, Caratan & Large American Flag. Large American Flag is new variety for me. I received the seeds from Seeds of the Month Club and am happy to try a new variety. I wanted to try another variety.....so, we shall see how they do.
The Celery was also sown today. This year I sowed my tried and true variety, Golden Self Blanching. I also started another new variety from Seeds of the Month Club, Utah. I'm really excited to see how the Utah celery does. Let's just hope we don't have more celery than last year!
Also sown were some Herbs; Rosemary, Basil (for inside), Winter Savory, Summer Savory, Cumin & Lemon Grass.
My seed starting & planting schedule for this year is as follows:
February 23/24 - Start Broccoli & Cabbage
March 9/10 - Start Cauliflower, Eggplants & Peppers
March 16/17 - Peas Outside
March 30/31 - Start Tomatoes
March 30-Mid April - Potatoes, Onions, Carrots, maybe Beets & Greens Outside, weather permitting
April Mid-Late - Broccoli Outside
April -Late to May-Early - Cauliflower Outside
May Early - Start Squash & Melons
May-Early to Mid - Tomatoes Outside
May-Late - Peppers & Eggplants Outside
May-Late to Early June - Direct sow, Beans, Cucumbers, Squash, Popcorn and any other warm crops that I forgot!
I'm sure this will change a bit, as it always does. But, that's the plan for now! How are you making out with your garden planning for this year???