Jack was carved late in the afternoon by "The Italian", then set outside for two hours to great our many trick or treaters.﻿ When I brought him back in to the house, I really hated the thought of just tossing him for compost. Since he was only exposed to the elements for a few hours, I covered him in plastic wrap and put him on the bench on the back porch to keep him cool overnight. 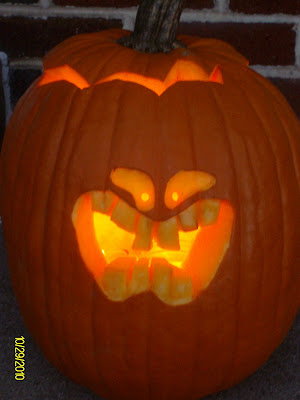 He's got one heck of a smile!! 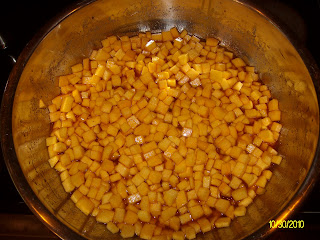 The next morning, the flesh of the pumpkin was cut into small squares and marinated in sugar, lemon juice, cinnamon, ground nutmeg & vanilla. The bowl or large pot is then covered and placed in a cool place for at least 20 hours. I put it in a cool spot in the basement. 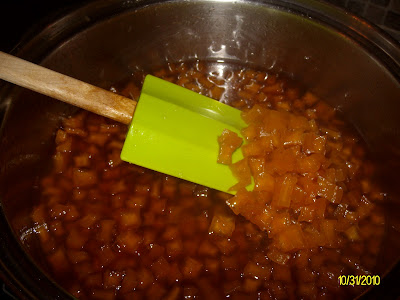 After the mixture marinates for at least 20 hours. It is cooked on the stove for 90 minutes to 2 hours.
Most of the pumpkin is translucent after cooking for 2 hours. The mixture is then covered, taken back down to the basement and let sit for at least 10 hours. 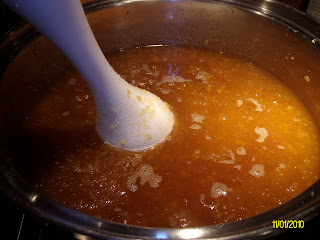 After sitting for 10 hours, the mixture is cooked for 40-60 minutes. I added some water and a little more lemon juice, then chopped up the chunks with the immersion blender. 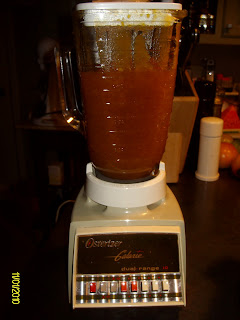 I got a little impatient with the immersion blender (since this is 4x the recipe) and decided to get out my avocado green blender! Yep, I have my original blender from the 70's! Now it looks more like a butter then a jam. I will see how the taste reviews come out and decide which way to chop it next year.  After cooking it. I took it back down to the basement to sit for another 10 hours. 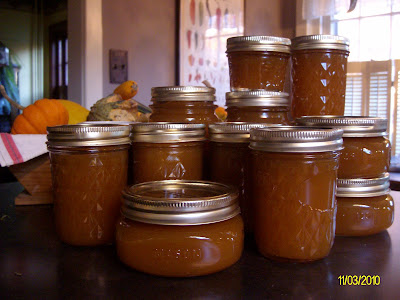 The mixture was then cooked for another 30 minutes. I added a little more lemon juice and about 1 cup of water to the mixture while it was cooking. It was then put in hot jars and sealed.
The jam last year was made with a fairytale pumpkin which made it a little more orange in color. I think it would be good made with squash also.
The recipe for this pumpkin jam can be found here.
Posted by Robin at 8:08 AM