After many weeks of no harvests.........I finally harvested some leeks from the garden! I had left several leeks in the garden until we had a craving for leek and potato soup. Well, "The Italian" came down with a slight cold the other day and I thought it was time to make some soup! 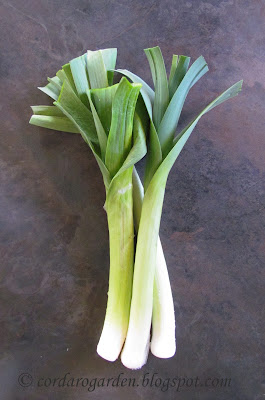 ﻿They weighed in at 8 oz. after they were completely trimmed.
The soup was absolutely delicious....and was gone before I could take a picture!!
Stop by Daphne's Dandelions our host of Harvest Monday to see more harvests from around the world!
Posted by Robin at 4:39 AM