This past week was not a nice week weather wise, here in our parts. It rained all week. The days are getting shorter, we don't have any more news on the garden move.....so, I have not been a happy camper and have not felt like blogging one bit. I have been getting some canning done which will make for some good posts at a later date.

The only harvest from the home garden that I weighed and took a picture of are two more Spaghetti Squash. 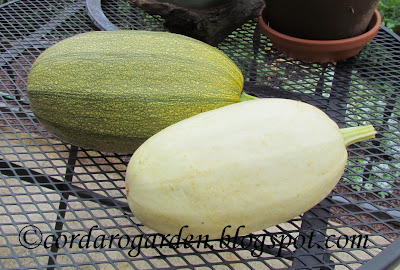 These fine babies were harvested on Tuesday or Wednesday. The green striped one was on the same vine as a few of the others I have harvested. It is now changing to a nice golden color. 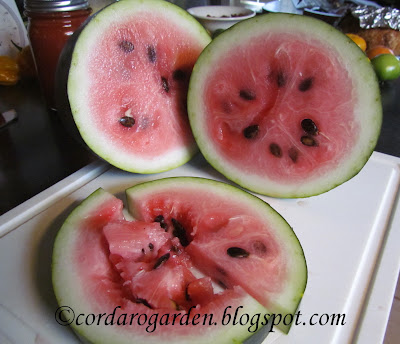 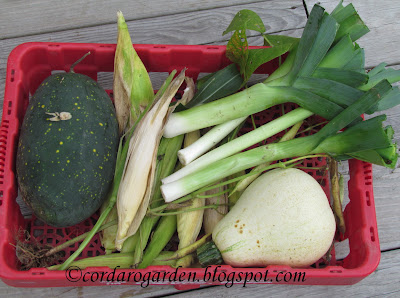 Sunday, I finally made it to the plots and harvested the last Moon & Stars Watermelon, a White Fortna Pumpkin, 4 Leeks and some small ears of Popcorn. The popcorn will be dried and weighed at a later date. I don't know what is with my leeks this year. They are so early and the outer layer of these four were starting to get mushy so I had to pull them. I really like to leave them in the garden and harvest them during the cold days of fall and winter. 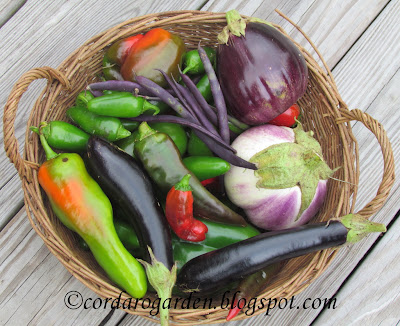 I also harvested three Eggplant a hand full of Purple Pole beans and lots of peppers at the plots. The bean tepee fell down again from all the rain and wind this week. Unfortunately they are done for the year. I think that I will get some more eggplant and definitely  a lot more peppers from the plants at the plots. 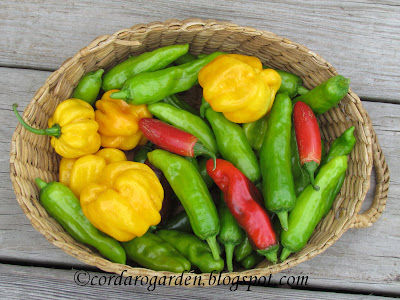 These beautiful Habanero peppers some Serrano peppers and Pepperoncinis were also harvested from the plots yesterday. I'm working on making different types of hot sauce.....so, we will see how they turn out. 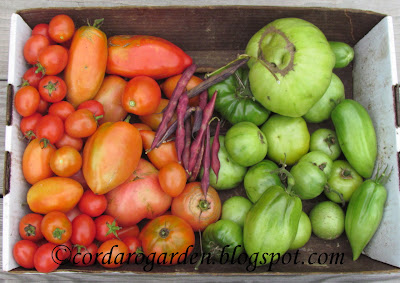 Here they are....the last salvagable tomatoes from the plots. The green tomatoes will be made into something that will be canned and posted about at a later date. The red tomatoes will be made in to some more tomato puree. There are also a couple of Trail of Tears dry beans in between the tomatoes. They are just starting to get ready. I think it will be a couple of weeks before most of them are ready though.
Total weighed harvests this week - 26.5 lbs.


Stop by Daphne's Dandelions our host of Harvest Monday to see what's happening in Veggie Gardens and Kitchens around the globe!!
Posted by Robin at 2:10 AM