I have been in a blue funk since receiving the mail on Monday. I received a letter from Farmland Preservation, the county department in charge of the Community Gardens. Subject: "THE CEDARBROOK GARDEN PLOTS - MOVING TO A NEW LOCATION!". What????

It seems that someone in the county has made a decision to move the gardens. For what reason?? They are not sure. But, it seems that the county wants to use that land for something else. The gardens have been there for quite some time (20 years + or -). They used to be in another location until the county sold that land Dorney Park.

Needless to say, I was very upset. I sent an e-mail to the woman who is responsible for the gardens on Monday afternoon. Tuesday morning I received a response and talked to her on the phone. Her department had no idea that the county had planned to move the gardens and at that point had no details on the dates. Typical goverment!!

Yesterday, I finally went over there to get things cleaned up from Irene. While I was there I talked to some gardeners who have been there since the beginning and went through the last move. Rumor has it, that it will be some time until the gardens are moved.....maybe as late as fall of 2012 or spring of 2013. Who knows at this point!!!

That being said....here's what the plots look like after several hours of tidying up and weed wacking. 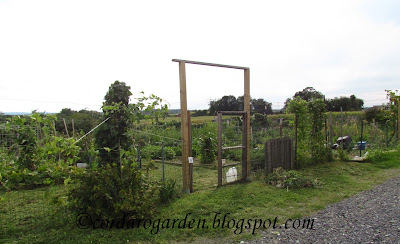 The bean tepee is standing once again. I put it upright, added some supports and tied it to the fence. None of the plants were uprooted. 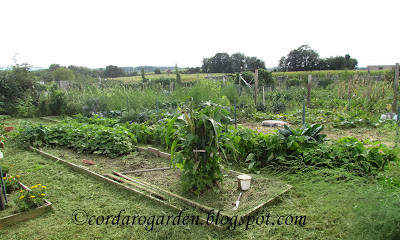 I put a metal stake in the ground and tied the corn and beans to it in the "Three Sisters" planting in Bed #2. The leaning posts and trellis for the Sweet Dumpling squash was removed and so were the plants. I did find one more squash. 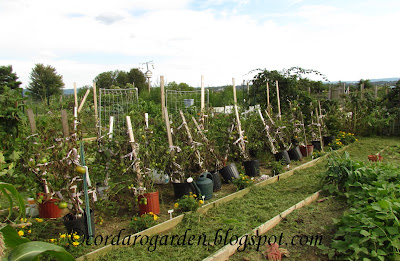 I left the leaning tomato plants alone in Tomato Alley. The plants are almost dead and why bother to try to make them upright at this point. I harvested some ripe tomatoes and a handful of green ones that were on the ground. The plants will most likely be removed, if I have the time over the long holiday weekend. 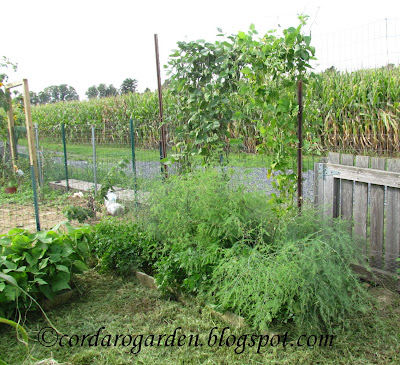 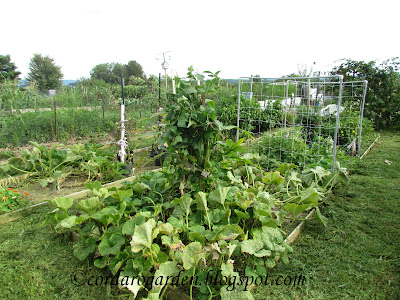 The corn & beans in other "Three Sisters" planting were staked  and tied up too. There are a few small white pumpkins on the vines in this bed. We shall see how big they get before the vines die off. As you can see, powdery mildew is setting in 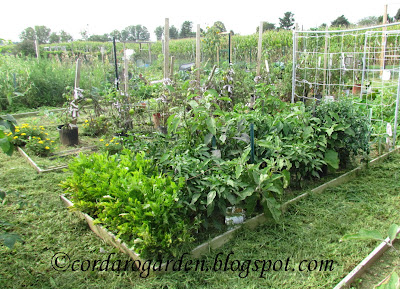 The hot & spice peppers and celery in this bed are thriving. The eggplants are doing OK too! 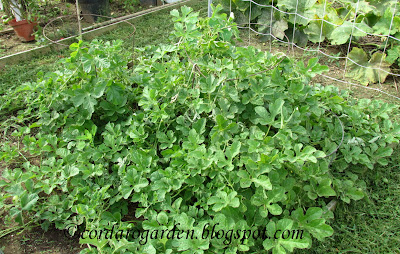 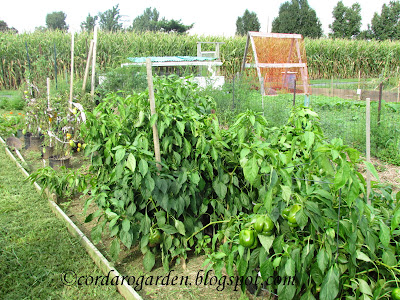 The bell peppers did really well. I only found two broken branches and only had to harvest two green peppers. The one plant is nearly 4' high at this point! Hopefully we will have enough warmer weather to allow the peppers to turn in color.
That's about it for now. I will post any news about the pending garden move as soon as I receive it.
Posted by Robin at 10:06 AM