The State of the Plots Mid-May

It seems like it has been non-stop since we got home from vacation! I spent a few hours at the plots on Saturday and then we had to go shopping for Sophia's BD Bar BQ on Sunday. We always seem to be away on her BD. So, I told here we would have a BD Bar BQ on Sunday after we came home. After shopping there were important things to do, like bake a cake and start the homemade baked beans. Sunday was packed full of putting the cushions on the outdoor furniture, cleaning up a bit, cooking and then putting up a canopy since the temps were in the 90's! The Bar BQ was a great success and Sophia was very happy!

Yesterday I had planned to catch up on blog reading and visit everyone's Harvest Monday posts. In the morning I decided to clean out the refrigerators and some canned peppers that I was not happy with. All went well until I managed to clog the plumbing in the under-slab in the basement between the main pipe coming from the kitchen and the floor drain. The remainder of the day was plumbing related, including a visit from the Roto Rooter man!

I was going to post the pics I took on Saturday. But, this morning I ran over to the plots in the misty rain to cover the strawberries that the birds think is a buffet! So, I took some more pics. There are lots of pics in this post! 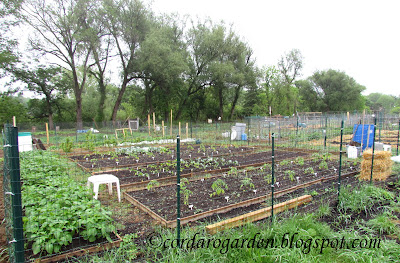 Before we went on vacation, I planted all of the Tomatoes, Eggplants & Peppers in the rain!! It wasn't the perfect time to plant them. Although Sophia is perfectly capable of taking care of the plants, I really didn't want her to have to tend to them. She does have school and track, which is very important. 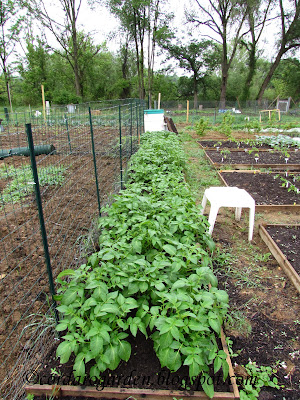 Bed#1 The Potato Bed
The potatoes really took off while we were gone. Some of these weren't even out of the ground when we left. Hopefully, I can get over there tomorrow and mulch them with straw. 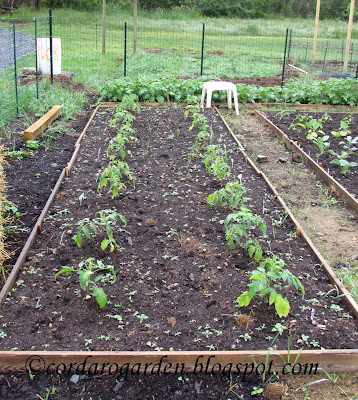 Bed #2 Tomato Alley #1
The tomatoes are doing very well with the exception of Aphids. I found aphids on some of the plants on Saturday. I was hoping that the pests wouldn't find the new garden the first year. I am going to make a spray today with potato leaves and see how that works. 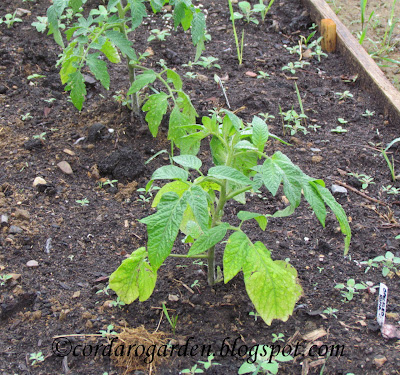 The new growth looks great and so do the weeds!! Mulching to do! 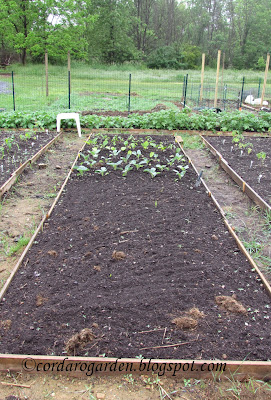 Bed #3
The empty front section of this bed will have a Three Sisters Planting and some trellises for beans, cucumbers and cantaloupe 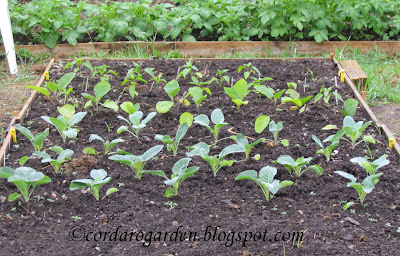 Toward the other end of this bed is Cauliflower, Eggplant and Hot Peppers.
There is also space for another trellis at the end. 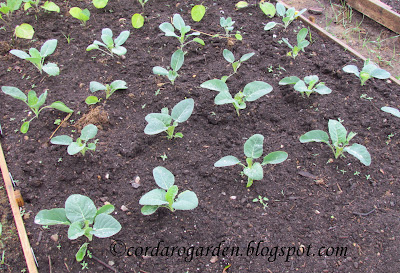 The cauliflower was really small when I put it in. I didn't think I would have the plots ready in time to plant spring cauliflower. We shall see if they produce. If not, I have plans for a fall planting in another space. 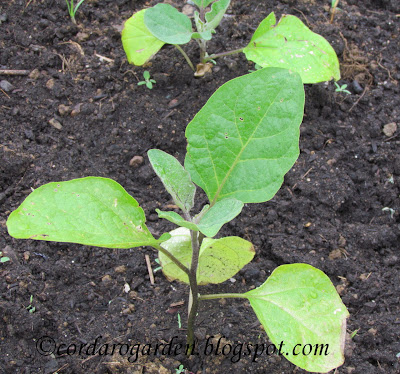 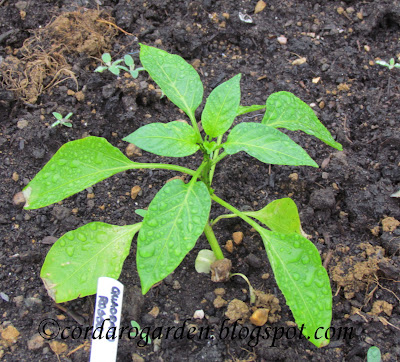 The Peppers also seem to be doing very well. 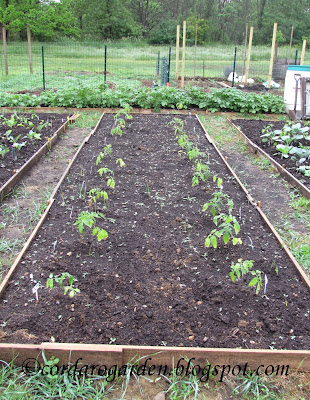 Bed #4 Tomato Alley #2
Not the best pic, but the tomatoes are doing just fine. There are two though that are struggling a bit. 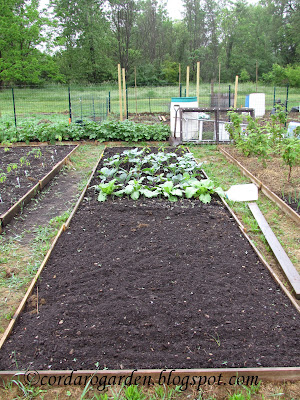 Bed #5
The empty section at this end will have trellises for more Beans, Spaghetti Squash and Korean Melons. At the far end is where the Zucchini will be planted. 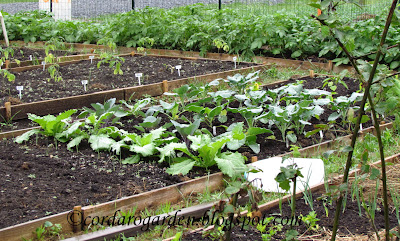 This is toward the other end of Bed #5.
I have planted Broccoli, a few Cabbage, 4 Chinese Cabbage and the Sweet Peppers. There are also some tiny Leeks planted in front of the Chinese Cabbage. Hopefully the Broccoli will produce since it was started earlier then the cauliflower. If not, there is a fall planting planned. One of the Chinese Cabbages bolted from the heat over the weekend. So, it will be removed. 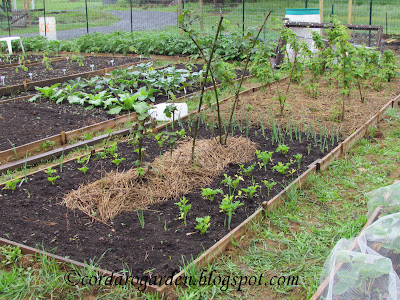 Bed #6
The Blackberry & Raspberry transplants are doing very well. Since the blackberries won't get too big this year, I planted onions & celery around them. There is also space for a trellis on the end where I will plant Lima Beans. 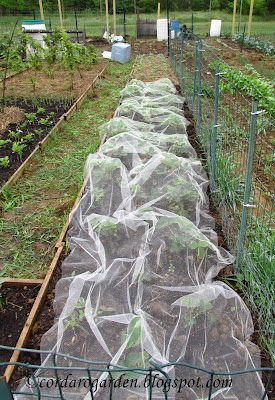 Bed #7 The Strawberry Bed
The plants that I covered were transplanted from the old site. The new strawberry roots that were planted this year are at the far end mulched with straw. They are all doing very well. 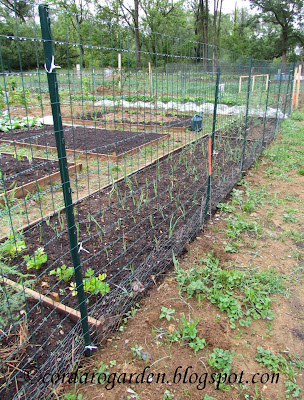 Bed #8
This bed is along the right side of the plots. The Asparagus beds are at each end and there are onions and a few celery plants in the middle. 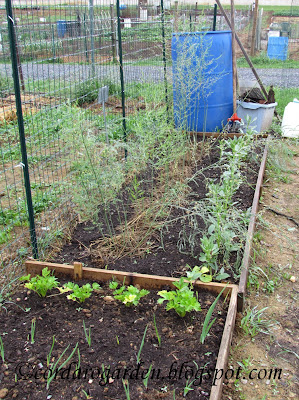 As you can see, the asparagus is going to ferns. I am so pleased that they made it through the transplant. Even though we did not have much of a harvest this year. The Fava Beans in the front are doing much better with the exception of ants. Last year I had the same problem with them. As soon as the rain stops I will try using cinnamon on the plants as a pest control.

That's the "State of the Plots" right now. There is still a ton of work and planting to do over there. I haven't decided what I am going to do with the paths. The gate is not up yet and I also have to sow the popcorn and beans along the front. I really think the worst part of the work is over. Hopefully, the weather will cooperate and I can spend a few days over there sowing some seeds and tidying up a bit!