My grandfather used to have this really big Sour Cherry tree at his house. I don't know what variety it was. But, I do remember as a child sitting in the tree eating the cherries when they were ripe. Then it would be harvest and freezing time for the cherries. They would be picked by the buckets full. Then we all sat at the picnic table behind the wash-house at the farm and removed the stems and pits. They would then be put in these plastic bags that were put  in square plastic containers. The containers were put in the freezer. Once they were frozen, the bags were removed. They were much easier to stack in the freezer then since they were nice squares. There were quart and pint sizes.

One thing I always remembered was that the old people got to use the easy pitters. Us youngsters had to use pitters that were really slow. I have no idea what happened to those great pitters. I did not find them when we cleaned out my grandfather's house a few years ago. They sure were great and I sure could have used one this week.

Saturday, I received an e-mail from a local orchard stating that the Sour Cherries were ready and would be available in limited quantities on Monday morning. I missed them last year and I wasn't missing them this year! Sour Cherry Pie with crumb topping is my absolute favorite pie in the whole wide world! I arrived 10 minutes before they opened and there were already 2 women waiting in line. I guess that I'm not the only cherry lover around these parts! 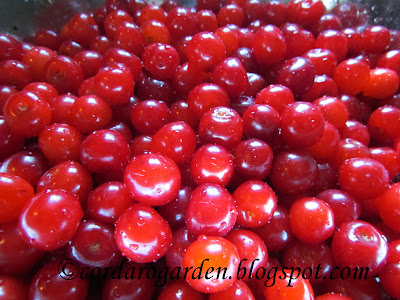 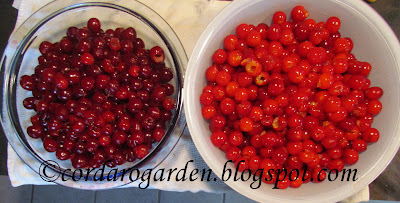 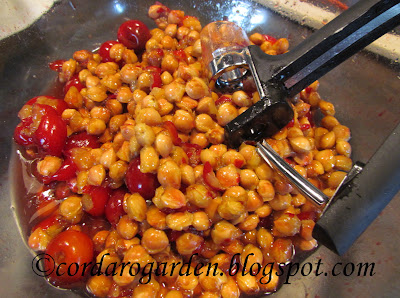 A couple of hours later they were are de-stemmed and pitted. Boy, I really need to find one of those old pitters. This one took forever and could give you carpal tunnel!

I froze 2 quarts and 4 pints of Cherries. Then I made some Sour Cherry Jam. Boy, that stuff is good......it tastes just like Cherry Pie! 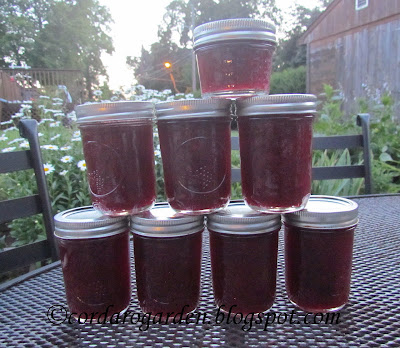 Not the best pic. I waited a little too late in the day for their photo op.

Today I'm going to surprise "The Italian" and make a Cherry Strudel or Cherry Cobbler with some homemade Vanilla Ice Cream for dessert! Yum!

I also froze Cauliflower, Broccoli and a portion of Fava Beans. "The Italian's" family loves to have fava beans on Christmas. Boy, those beans are time consuming! I bet somebody out there knows an easy way to peel them.


What's been going in or out of your Kitchen Cupboard lately???? Anything good???