The Tale of the Decapitated Coleus

Once upon a time there was a beautiful coleus named Religious Rutabaga. One day she was purchased by a woman who brought her to her new home. Even though she was one of many coleus' the woman had. She was the woman's favorite. She was well provided for with love, sunshine and water. The first year at her new home, she grew big and tall. Her colors were magnificent! By the summer's end her colors began to fade and she was getting tired. The woman clipped off one of her branches, rooted her and placed her in a new pot with new soil. She was taken inside and spent the winter with "The Italian" in his office. When Spring arrived., her magnificent colors came alive once again. One day the woman took her outside to enjoy the nice spring weather. 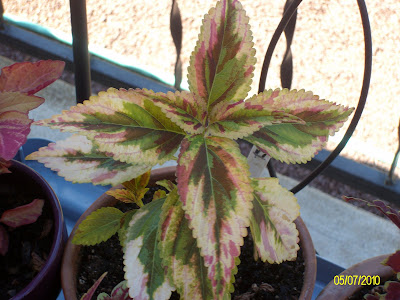 She was so happy to be outside once again! Later that day the winds began to blow! The woman ran outside and moved her to a safe place in a corner on the porch. That evening the woman and "The Italian" went out for dinner. They enjoyed a simple dinner , a couple of cocktails and some quiet time together. When they arrived home, they walked up the stairs to the porch. To the woman's dismay, a rain jacket had blown off the bench and landed on top of her favorite coleus, Religious Rutabaga! She picked up the jacket. Oh no...she was broken at her base! The woman took her inside and clipped off her bottom leaves. She then put her in some rooting hormone and placed her back in the soil. As the days passed, "The Italian" told the woman "I don't think she is going to make it". The woman tended to her every day, hoping and praying she would make it. Then last night, she had perked up! Although she lost some of her leaves, it looks like she will soon be able to go outside and enjoy the sunshine once again! 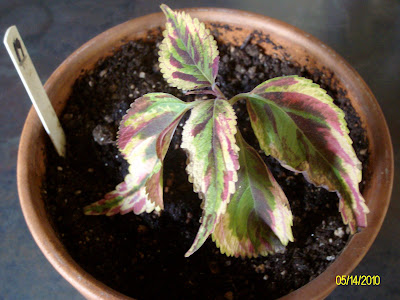