The garden is growing like crazy. It took me a couple of days after coming home to get it under control. The beans, cucumbers, tomatoes and cantaloupe had grown so much that I could not get between some of the beds. The excessive heat we are still having made it difficult for me to go out and take care of everything in one day. But, it's under control now!

I harvested over 7 lbs of cucumbers in two days after throwing out at least a dozen that got too big while we were away. The Alpine Strawberries are starting to produce very nice size fruit. It's hard for me to keep track of the strawberries harvested. My "Little Garden Helper" tends to wander over there and eat them.

I finally harvest a head of Savoy Cabbage. It weighed 2 lbs. There are two other heads in the garden that  are much firmer, but not as big in size. We will see how they do.

I also harvested a couple of Hot Cherry, Jalapeno & Hungarian Paprika peppers on Wednesday. I have the paprika peppers hanging up to dry. I am excited to see how the ground paprika turns out when they are dry.

The tomato haul for the week will be announced on Harvest Monday!! 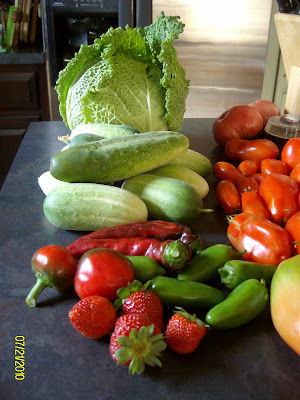 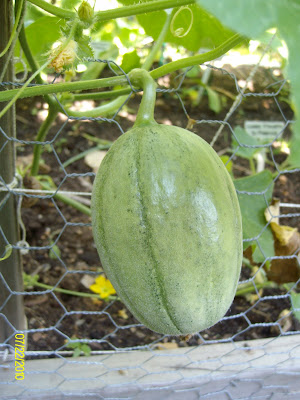 Cantaloupe are starting to grow! 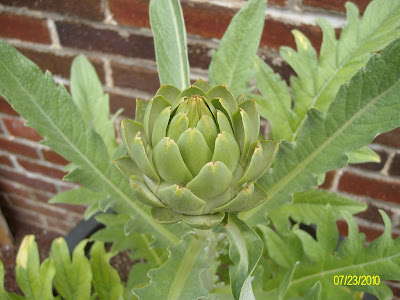 The Lone Artichoke is coming along nicely.
I am hoping that the other plants start to produce as well.
Posted by Robin at 3:01 PM