Well, my tomato plans have changed a bit since I did this post. I had originally planned to sow 30 tomato plants consisting of 17 varieties. We are now going to sow 41 plants consisting of 20 varieties. First, 30 plants would not be enough for our family's needs. Second, Emily sent me seed for a wonderful sounding tomato called Purple Calabash. It's her favorite....so how can I resist???

Third, I also found a local Heirloom Seed Project at Landis Valley Museum where I purchased two additional varieties, Reigart Plum & Belgian Beauty. "The Italian" and I were watching PBS a few weeks ago and saw a program on Landis Valley Museum. We have never been there and truthfully didn't know of it's existance. It is about 60 miles from where we live. The museum is dedicated to Preserving Pennsylvania German Culture. I really wish that I had known about their seed project earlier. They have a lot of Pennsylvania Heirloom seeds available to purchase. I was as good as I could be and only purchased a few things that I absolutely "Needed"!!........well, basically "Wanted". 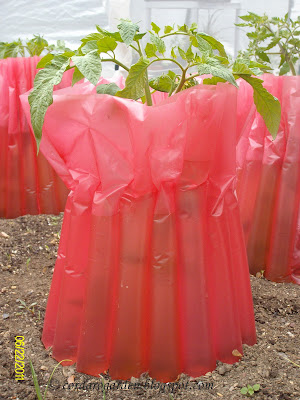 The "Kozy Koats" worked out very well last year and I was able to sow the tomato plants in the ground about 5 weeks earlier then normal.
The balance of the plants for us and others will be germinated in mid-March. I do not want to go through what I did last year. Last year I had started all of the tomatoes in February and they go so big it was a real pain to tend to them.
Posted by Robin at 9:35 AM