The cold frames are doing very well maintaining a good temperature. The lowest temperature that has been recorded is 27 F at night when the temperatures outside were in the single digits at night and only in the teens during the day for a few days..that's pretty good! The cold frames face south and do not have many elements creating much shade on them. On a bright sunny day when the temperature outside only reaches the 20's, I have to open them up to let in some cool air. I really have to pay attention when the sun is shining or they will climb to 70 F or higher in no time at all. I really don't want the temperatures to fluctuate too much and stress the plants.


When the cold frames are covered with snow, they usually stay around 37 F all day and all night. I think that this makes for happy plants. The temperatures over the next week are supposed to climb in to the mid 50's!! The higher temperatures in conjunction with the extended day light hours will hopefully get those veggies growing!! This year I will definitely get my winter vegetables planted on time and not in November!! 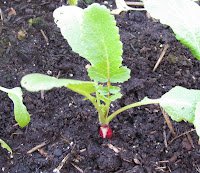 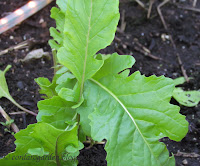 ﻿﻿﻿﻿﻿﻿﻿﻿﻿﻿
A radish showing a little red and some Arugala
I am not sure how much heat the rope lights are adding to the overall temperature inside the cold frames. I did however check the soil temperature on Saturday and it was about 45-47 F. The remainder of the garden beds are still covered with a significant amount of snow....so, you know the ground is quite cold. 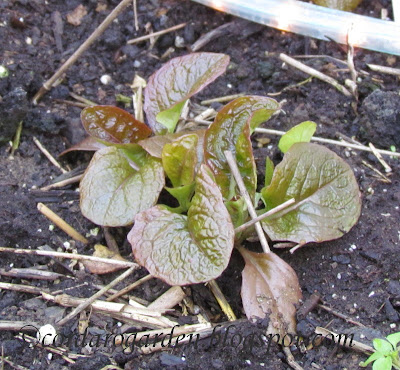 A little more lettuce
Another observation that I have made is that a few plants in the cold frame on the left had some insect damage and there was little damage in the other cold frame. I had added some diatomaceous earth a while back and the munching has seemed to stop. 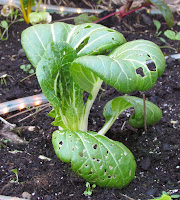