"The Italian" and I spent 6 hours yesterday and about 4 hours today at the plots. Yesterday it was very windy and the air was very cold even though the temperature was in the 50's. Today it was much nicer outside. The temperature was in the low 50's and there wasn't much wind. From talking to long time gardeners at the plots, we have learned that it tends to be windy there.

After all that time we finally have the gates installed and added some height to the front fence. 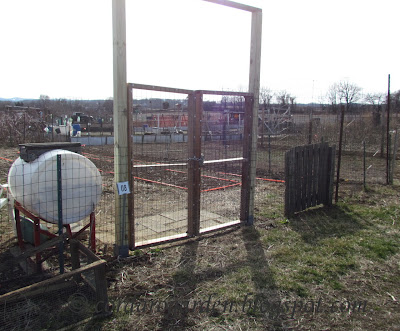 The gates are 5' tall and wide. They are attached to 8' posts. "The Italian" has some kind of water saving system designed that requires these two posts to be that high. He is also going to install turn buckles and gables at the top of the gates to keep them from saging. The old gate to the right was screwed shut and wire fencing was put over it. Although you cannot see it in the picture, I did put bunny fencing at the bottoms of the gates. It does drag on the ground a bit to try to keep the critters out. 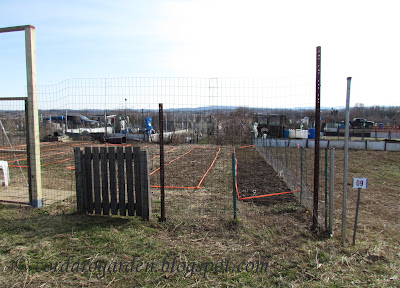 I took pieces of 4' high fencing that was left at the plots from the previous gardeners and attached it to the existing fence. There were several old metal posts left there too. "The Italian" hammered them into the ground and I did the grueling task of cutting pieces of heavy wire and wiring everything together. As you can see, there are waves in the fencing...but, it was free and will definitely serve it's purpose!! I have to say that this has been my least favorite thing that we have done at the plots. I wasn't the happiest of campers yesterday and today. It will all be worth it when those beds are full of beautiful veggies though.
Oh...look at the plot to the right of us.....no more weeds!!! We have newbie gardener nieighbors who have been waiting over a year to get a plot. I was so thrilled when we got there yesterday and saw that the weeds have been removed. They really seem like nice people. They also have a four year old son who will give my "Little Garden Helper" someone to play with.
Speaking of "My Little Garden Helper", he is going to Florida tomorrow to see his other grandparents. He has only seen his grandmother once and has never seen his grandfather. I'm feeling quite teary knowing that my little guy is leaving on a jet plane and will be gone for two weeks.
Posted by Robin at 6:41 PM