It's definitely been the year of the pepper! Tuesday, when I cleaned out the cold frame beds, I had to harvest a few peppers. There were two broken branches on one plant and one plant that needed to be removed. 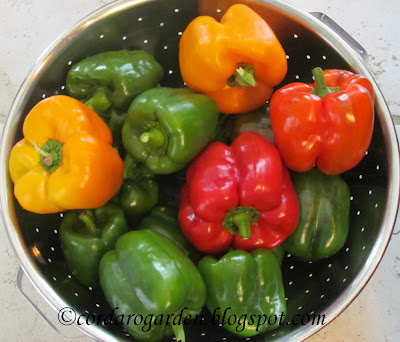 4.7 lbs. of  peppers from that one picking!
My wine collecting neighbor took only two since they were going to the shore. Two peppers = 1 bottle of French wine! Not Bad! His wife said that peppers are going for $5.99 a pound! That's $28. worth of peppers in that colander! 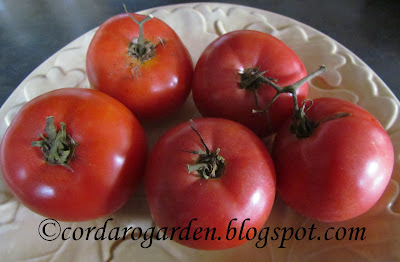 I also picked these 5 beautiful Eva's Purple Ball tomatoes from the home garden on Tuesday. I thought that these would most likely be the last good tomatoes harvested this season.....But on Sunday I picked two more! We are very pleased with this variety. They are very prolific, have a wonderful flavor for slicing, are good for canning and sauces and don't seem to disease or crack no matter what the weather. Next year we will be planting a lot of this variety. 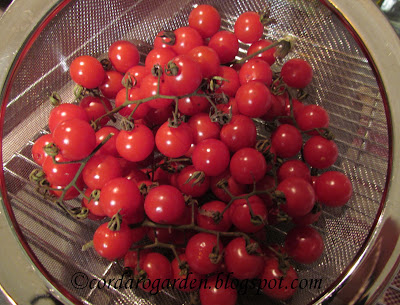 The Matt's Wild Cherry plant had to be pulled from the one cold frame bed on Tuesday. I have been really bad about not picking the cherry tomatoes this year. My "Little Garden Helper" always ate most of them. But, he has been in Florida all summer with his other grandparents and his mother.
Sunday I made my weekly visit to the plots in between the rain. The fall raspberries were really destroyed from the hurricane. I always eat the few ripe raspberries that weren't blown away while I'm there harvesting. Of course there were lots of peppers to harvest! 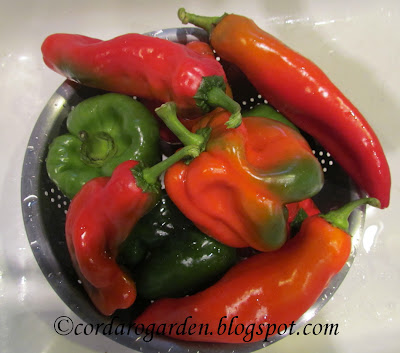 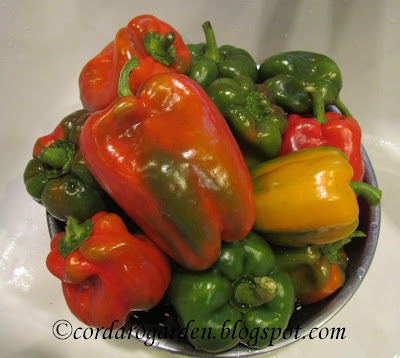 these were harvested and taken directly to my in-laws. There were 6 lbs. 9 oz. of sweet peppers. I was so happy to leave them with my in-laws! How many peppers can two people eat in a year?? 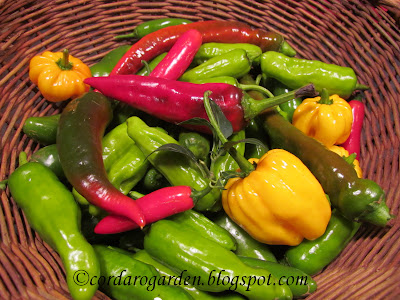 And of course there were more hot and spice peppers to pick at the plots also.
I harvested some more dry beans and a little squash on Sunday. I think the squash was a small Long Island Cheese Squash. I will weigh it when I'm sure it is viable. All of the dry beans will be weighed at one time when they are all shelled.
Total weighed harvest this week: 15.8125 lbs
Peppers:
Bell - 11.25 lbs (180 oz)
Hot & Spice - 28 oz.
Tomatoes:
Eva's Purple Ball - 2 lbs.
Matt's Wild Cherry - 13 oz
Stop by Daphne's Dandelions, our host of Harvest Monday, to see what's going on in Veggie Gardens around the globe!
Posted by Robin at 5:27 AM