Wilderness over at Growing and Cooking made a great suggestion to start a weekly preserving post similar to, but different then Harvest Monday, for bloggers to share what they have been putting away and recipes. I thought this was a great idea! With her permission I am starting "Thursday's Kitchen Cupboard". This will be a day to share what you have been canning, drying.....or to share a recipe, a picture, a tip.....or how you have used some of your preserved goods.


So come on and join the first
"Thursday's Kitchen Cupboard"!!
A couple of weeks ago I purchased some pears from a local grower. I got some Bartlett, some French sounding variety that I can't remember the name of and a bag of seconds.

I canned 4 pints of Bartletts since they were the first to ripen. I like to can mine in part juice and part extra-light syrup. I use some of the seconds to make the juice and add it to the syrup.

Then I made some Pear Vanilla Nutmeg Jam with a mix of pears that were ready. Boy, this stuff is good!

Last year I had found a recipe for Pear Vanilla Jam. Then this year I was doing a little research and found a recipe that had a little nutmeg in it. I had also purchased some Real Fruit Pectin made by Ball. The recipe on the flap allows you to adjust for the amount of fruit you have. So, I chopped up what fruit was ready and came up with this.
I don't remember exactly how much fruit I had. I have adjusted this recipe to make a batch with one box of powdered pectin.
Pear Vanilla Nutmeg Jam
Directions:
Since I had several cups of pear juice and extra-light syrup mixture left over, I decided to try to make some Pear Syrup. After rummaging through the booze, I found some Pear Liquer that "The Italian" must have had in his dowry. I added 2 oz. of the liquor to the liquid and boiled away. 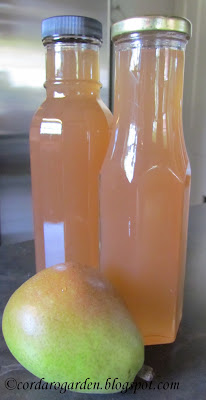 The mixture was boiled down to less then half, which took about 1 1/2 hours. This syrup will be great for dessert toppings or to add to an adult beverage! Maybe there is a pear martini in our future! "The Italian" will have fun with this! The syrup was not canned and is being stored in the refrigerator.
After what seemed like forever, the French Pears that "The Italian" says are Anjou Pears, finally ripened enough to make a small batch of plain old Pear Jam. 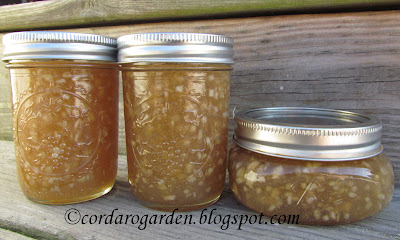 I made this jam according to the instructions on the Ball Real Fruit powdered pectin.
So, join in and share a recipe or a good tip on preserving the harvest!